Created by Robert E. Neale and edited by Michael Naughton, this 338 page ebook is a massive collection of Neale’s modular work over several decades. Neale is revered by fodlers world-wide as one of the major creators of all time and his work is sure to inspire anyone who takes the time to study it. The booklet is priced cheaply since we want folders everywhere to enjoy his work.

In the early days of the American origami movement, models were circulated haphazardly and rarely published. I began folding new models in the late fifties. Unfortunately, I failed to keep adequate notes on the dates of my originations. My modular folding was inspired by seeing a paper ball hanging in the home of a
Japanese neighbor of my brother. It consisted of many elements sewn together. I realized immediately that I could create such a ball without using thread or paste. So my first modular models were balls. From this  beginning, I explored the standard shapes and variations.

Since my general goals for my origami models were those of simplicity and elegance, modular folding appealed. I cannot say when this modular folding began. I assume that it was sometime in the early sixties. Models were shown and taught at monthly origami meetings in New York City and at some of the first annual conventions. Some of the earlier work was recorded during the years 1976-9. Even back then, I did not know the actual dates of their creation.

I once believed that I was the first one in the country to do modular folding, but the most accurate historian of origami I know, Sam Randlett, affirms that Jack Skillman was first. I regret that I, like many of the early creative American folders, did not publish their creations or keep accurate records of them. Many of their models are still unknown to most contemporary paperfolders and undoubtedly many of these have been lost for all time.

Please note, this download is 60Mb and may take some time to downlaod, so please be patient! 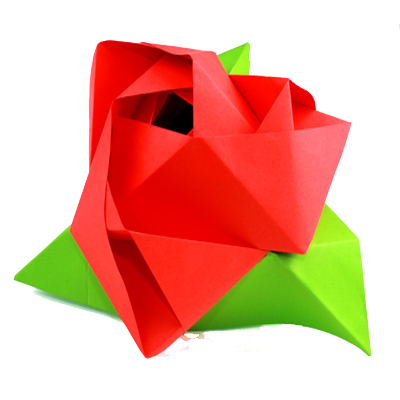